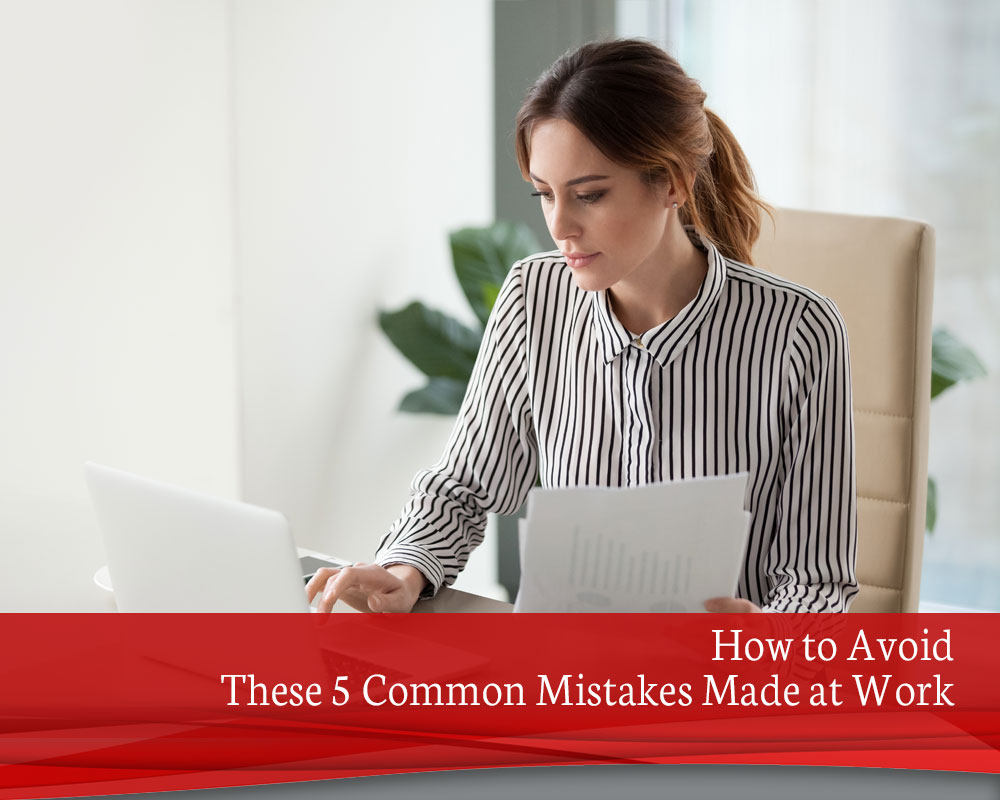 How to Avoid These 5 Common Mistakes Made at Work

The office can be an awkward space to navigate. Often, employees have little to no choice about who their peers are, or who else is on the team helping to get the job done. While most people have the maturity and grace to be civil, however, it’s still incredibly easy to blunder into critical etiquette mistakes by not paying attention. In fact, the most common mistakes made at work aren’t performance-related screwups. Instead, they’re behaviors to which many people are oblivious, but affect their ability to work happily and well with others.

Struggling with tension or friction with a colleague? There’s a chance that someone’s behavior is causing it. Here’s a roundup of the five most common etiquette mistakes routinely found in offices and how to avoid them gracefully.

5 Common Mistakes Made at Work & How to Avoid Them

The most common mistakes made at work aren’t things that involve completing a task incorrectly. Instead, they’re part of the everyday behaviors unconsciously engaged in which go unnoticed – but not without effects. The five office mistakes that are the most common include:

Professional environments tend to be full of driven, educated perfectionists. That’s great for a high-stakes company with ambitious growth targets and a reputation for innovation. However, such people may also be prone to handling “failure” poorly. They’re used to succeeding. As a result, they may interpret obstacles and mistakes as a personal shortcoming rather than a reflection of a task’s difficulty.

Solve this problem: This attitude may stem from two potential causes: an unsupportive work environment or a poor personal mindset. If many employees seem to handle “failure” poorly, introduce training to work on shifts in mindsets and help promote a better work culture.

Job security is comfortable, but sometimes that means people become too comfortable. Once a position has been mastered, a person may become complacent and won’t push themselves to the next level because their position feels secure. However, that might backfire because a lack of self-promotion may result in bosses failing to notice an employee’s accomplishments.

Solve this problem: Create an achievements board in the breakroom and encourage employees to share their accomplishments. Or, as an employee, make sure that the boss knows that the latest demanding project went off without a hitch.

Constructive criticism is not fun to give – but employees want to hear it. At least, that’s what a survey by the Harvard Business Review discovered. Some 57 percent of employees indicated that they preferred to receive corrective feedback because they felt that it had a positive impact on their job performance. Likewise, the ability to provide negative feedback appropriately had a significant effect on how well-appreciated a manager or boss was within an office.

Solve this problem: Learn how to give constructive feedback to employees because there’s a good chance they want it. Likewise, for those who fall into the 43 percent of employees who shun constructive criticism, learn to see it as a growth opportunity rather than a personal attack.

Most people know better than to swear at work – some 81 percent of managers believe it reflects negatively on professionalism. However, poor language choices can run the gamut. From insensitive word choices to inappropriate topics of conversation, poor language choices can have a dramatic impact on the way an individual is perceived in the office.

5. Too Much (or Little) Multi-Tasking

The workplace has a love-hate relationship with multitasking. It’s often seen as a virtue in fast-paced, demanding environments, but it can prove detrimental in fields where focus and concentration are needed. However, doing too much or too little of it can negatively affect a person’s image in the workplace.

Solve this problem: Eliminate unnecessary distractions while at work, but don’t focus on only doing your job. Take the time to expand your role and responsibilities strategically to become a more valuable, connected employee in the long run.

Happy Employees Are Productive Ones

The most common mistakes made at work might not impact an employee’s performance in an obvious manner, but they’re nonetheless behaviors that can hold someone back in their career. From minor etiquette mishaps to poor emotional regulation, these behaviors can dramatically impact the vibe of an entire office.

Recognize any of these? Everyone is guilty of one or more at some point. Recognizing them is the first step to creating a happier, more productive workplace.

XMC helps companies optimize their operations for maximum productivity and achievement. Contact us to discuss the latest technological solutions for your office’s workflow.